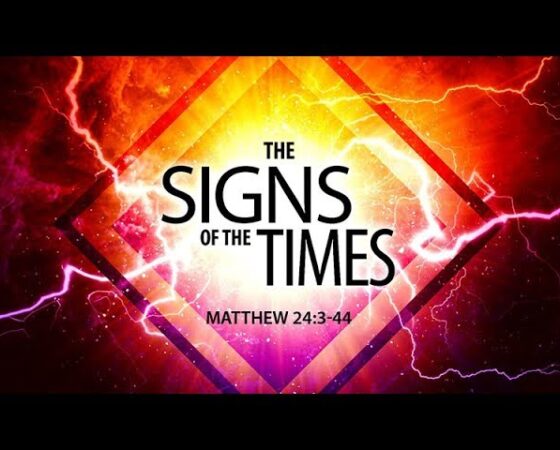 “Now as He sat on the Mount of Olives, the disciples came to Him privately, saying, “Tell us, when will these things be? And what will be the sign of Your coming, and of the end of the age?”
And Jesus answered and said to them: “Take heed that no one deceives you. For many will come in My name, saying, ‘I am the Christ,’ and will deceive many. And you will hear of wars and rumors of wars. See that you are not troubled; for all these things must come to pass, but the end is not yet. For nation will rise against nation, and kingdom against kingdom. And there will be famines, pestilences, and earthquakes in various places. All these are the beginning of sorrows.”
Matthew 24:3-8

Many people enter 2022 feeling joyful and full of joy. The year 2021 has been passed with great difficulty amid the second wave of COVID-19 Delta, and in early 2022 the Omicron wave can also be passed well. Churches and COOL have almost all carried out activities onsite while still implementing health protocols. We all look forward to 2022 with new hope, a new spirit and of course with a new paradigm.

But in the midst of this pandemic, it turns out that another problem has arisen that makes many people worried. The conflict between Russia and Ukraine developed into an open war between the two. This war disrupted economic stability in Europe and the United States. One of the direct impacts of this war was the food (wheat) crisis, since Russia and Ukraine are the largest wheat producers in the world. If the war between them does not end soon, then the wheat-consuming countries will look for other foodstuffs and that will certainly disrupt the stability of food security in countries that do not consume wheat. Not to mention that the two countries also have nuclear weapons that are feared to be used if the war situation deteriorates.

“Pandemic as Part of the Sign of the Second Coming of the Lord Jesus” , there are two different stages in the context of Christ’s second coming, namely:
· Church appointments (rapture or parousia) and
· The appearance of Christ in glory (glorious coming)

Both Matthew and Luke record Jesus’ teaching on this subject. But the disciples’ questions at the time showed they had a view that the two events happened simultaneously. That is why Jesus explained to them that the two things are different and have different signs . Of the signs that the Lord Jesus described, some were specific to the Jews, some were for His Church, and some were for everyone.

Pandemics and wars are signs of shock for everyone. Keep in mind it doesn’t mean that every time a pandemic and war strike the Lord Jesus comes, but these events remind us that His coming is approaching.

One of the things that is quite concerning is the statement of the Lord Jesus that the rumors of war, the news of war and ‘the nation rising against the nation’ (which can also be interpreted as the occurrence of a civil war in one country) will occur and be heard everywhere. But all of that has to be viewed as something that will indeed continue to happen. This is actually not surprising because in the previous verses the Lord Jesus Himself said that love will grow cold (Matthew 24:12) and also that misdirection will occur in it is in teaching (Matthew 24:11) that many people turn away from love and God who is nothing but the embodiment of love itself.

TIME Magazine International in the special issue “Y2K”, a special edition entering 2000, says that the 20th century is the bloodiest century in the history of mankind (“the bloodiest century in human history”). The total number of casualties due to the armed conflict that occurred after the Second World War until 1999 was actually far more than the total casualties caused by the First World War and The two are merged. That means even 55 years after the World War ended, other wars were still going on and casualties were still falling; even more.

In the context of ‘nation against nation’, even armed conflict within the same country can be said to be war. Acts of genocide or attempts to eliminate certain ethnicities, usually carried out by opposing ethnicities, also still occur in some places of the world. Even if drawn further, then acts of terrorism can be categorized as war. Entering the 2020s, we are seeing again interracial and class conflicts such as those in the United States with “black lives matters” that also cost lives; and arms conflicts due to ideological differences that occur in Africa, Asia and the Middle East.

This escalation of warfare between nations and ethnicities should not be underestimated. The Lord Jesus Himself reminded that these were signs that His coming was approaching. Yes, the rumor of war is part of the sign of the end times approaching soon.

So how do we respond to the roar of war everywhere?

1. Remain True and Faithful to God (Matthew 24:13; Luke 21:19)
Wars and conflicts occur because love is getting colder. Many people turn away from God who is love itself. The consequence of more and more people distancing themselves from God is increased hostility to those who remain faithful to God. That is why after explaining the signs, Jesus reminded that persecution of believers also occurs.

2. Keep Loving and Do Your Best for Peace to Be Achieved (Matthew 5:9)
The Lord Jesus reminded through His sermon on the mount, that followers of God or children of God, have the characteristic of ‘bringing peace ‘. We keep praying for peace, we say peace and we do what we can to keep bringing peace wherever we are. This is our duty and characteristic as children of God.

[Note: it is very interesting in the next verses, which are 10 and 11, the Lord Jesus raises the question of the persecution suffered by God’s children because of righteousness and because of firm faith in God].

3. Stay Alert and Don’t Be Disturbed (Matthew 25:7)
We do not become afraid or agitated because we know God holds everything and whatever happens in this world, including war, is within God’s control. But we still need to be vigilant. The Lord Jesus taught in the previous chapter that we should be watchful (24:42), ready (24:44) and continue to faithfully do His command (24:46) because His coming is approaching and the Lord Jesus will pick up those of us who believe.

The Lord Jesus is coming soon, let us truly be in Him and do what God wills. Amen.