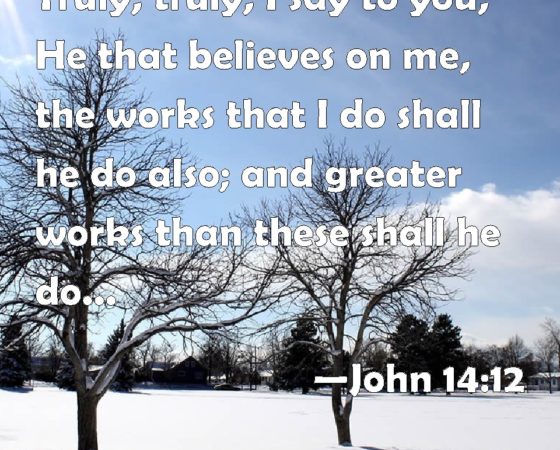 In the book of John 14:12, Jesus says:
“Most assuredly, I say to you, he who believes in Me, the works that I do he will do also; and greater works than these he will do, because I go to My Father.”
Jesus says that if we believe in Him, then after He ascended to heaven, we shall do the works He did; even greater things.
When Jesus was on earth, He served in Jerusalem, in Judea and in Samaria. But after Jesus ascended to heaven all of us who believe in Jesus shall serve Him even to the ends of the earth. And the number of miracles done by believers is far greater compared to the number of miracles Jesus did when He was on the earth.
It means that after Jesus is in heaven, He provided anointing and double portion blessings to us who believe. Double portion not only means multiplied by two, but it also means exponentially.
How many here wants to receive blessing or double portion anointing?
2020 Pentecost was not the same as the previous Pentecost. It was the greatest and the last Holy Spirit Outpouring before Jesus comes back again. That’s why Jesus equips us with double portion anointing. After Holy Spirit was poured out at the First Pentecost, one of the signs that happened on that time was the paradigm shifts in ministry.
All those times, the understanding from Jesus’ disciples was that salvation only belong to the Jews. Cornelius, a gentile, repented and baptized by the Holy Spirit. He spoke in tongue and was baptized in water. Through a lengthy argument and with Peter’s testimony, the Apostles and all believers in Judea received salvation. The salvation that was not limited only to the Jews, but to all nations including Indonesia. And this event caused paradigm shifts in evangelism.
The same way happens in this Third Pentecost era. Throughout this COVID-19 pandemic time, it is so clear that there’ll be ministry paradigm shifts for the last and the greatest harvest of souls.
1. Church services become online
Previously, we worshipped in a physical church building corporately, we had fellowship together, we shook hands, we expressed our love, there were laying of hands, and now, we cannot do these things anymore. We are entering the New Norm.
To be honest, I don’t really understand fully with this paradigm shifts. The Lord asks me to do as what is written in Jeremiah 33:3, ‘Call to Me, and I will answer you, and show you great and mighty things, which you do not know.’ This is what I’ve been doing nowadays. I believe that with the ministry paradigm shifts, there’ll be greater harvest compared to when we use old ways to minister.

II. The awakening of the young generation
The second thing, for the last and the greatest harvest to happen, the Lord says that there’ll be an awakening of the young generation. Russel Evans, the Senior Pastor of Planetshakers, Melbourne in 2017 received a vision about Indonesia; that the Holy Spirit is being poured out mightily in Indonesia. He saw millions of young generations filled with the Holy Spirit. They devotedly in love with Jesus, they live uncompromising with sin and they will win many souls. This talks about concrete steps which will be done by the whole church to finish the Great Commission of Jesus Christ.
1. The young generation is the engine that propel the End Times Movement
The movement to finish the Great Commission will be propelled by the young generation. Then, we will experience how God process His church. We will be pruned, purified, reset by God. We are entering the New Norm, New Dimension, new paradigm in ministry. All of these are done to prepare for the last and the greatest harvest of souls before Jesus second coming.
2. The Second Conference of “Rise Up, My Generation”
One day I was reading 1 Kings 20:13-22. I was asked to share what’s in my heart for the Jeremiah generation during the live streaming of the 2nd “Rise Up, My Generation” conference with a theme: Finishing A Great Commission in June 26th 2020. 1 Kings 20:13-22 is telling the story about a prophet who come to Ahab, the King of Israel, to announce the message of God that God will surrender the enemies who was the Arameans who were surrounding Samaria.
Ahab asked who would help in the fight against that great enemy. That prophet answered young leaders under the provincial commanders will do it. The number of these young leaders were only 232 out of the 7,000 Israelites. These young leaders were the one who attacked first. These 232 young leaders followed by the armies destroyed the Arameans. At that time, the Lord spoke to me that the Jeremiah Generation who must lead the spiritual warfare to lead in the last and the greatest harvest of souls. This is a new paradigm in ministry.
3. Double Anointing
New Norm in the church reopening for children, the elderly and people with underlying conditions have high risk to contract COVID-19. These groups are forbidden to worship in church in crowds. I believe this is not a coincidence, but the Lord is talking about turning over the generation. It seems like the Lord is enforcing the elderly to delegate or pass on their tasks to the young generation. This also is a form of ministry paradigm shift.
Elisha was a young prophet representing the young generation who were used by God for a greater task. At that time, Elijah was asked by God to anoint Elisha to be a prophet replacing Elijah. When they cross the Jordan river, Elijah spoke to Elisha, “Ask me what you want me to do for you before I’m taken away from you.” Elisha answered, “Please let a double portion of your spirit be upon me.” Elijah said, “You have asked a hard thing. Nevertheless, if you see me when I am taken from you, it shall be so for you; but if not, it shall not be so.” 2 kings 2:9-10
Apparently, the Lord fulfill Elisha wish. He witness Elijah was swooped up. In the end, Elisha receive 2 portions of Elijah spirit. Double portion. The meaning of double portions of Elijah’s spirit is:
Firstborn birthright: Elisha as Elijah’s spiritual firstborn received twice inheritance more compared to the other spiritual children. Elisha asked his spiritual father to give a greater prophet authority to himself so he could continue on Elijah’s ministry.
Miracles Multiplication: Elijah did 7 miracles, while Elisha did 14 miracles. One of the miracles happened after Elisha died. His bones could raise the dead. Elisha’s roles as a prophet for the kings were more than Elijah. Elijah were the prophet in the time of King Ahab, meanwhile Elisha was the prophet in the time of King Joram, Jehu, Jeoahaz, and Jehoash.
Pst Niko Knjotorahardjo Sermon