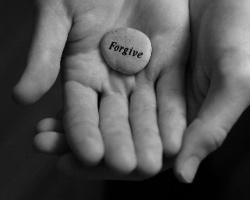 In Matthew chapter 18: 23-35 there is a parable of someone who owes the king ten thousand talents and could not pay. He begged for extension to pay his debt but the king moved by compassion not only gave him an extension but forgave him of his debt. That servant however did not forgive another person who owed him 100 talents and threw him into prison instead.

Jesus taught us to forgive one another up to seventy times seven. Does that mean we count how many times we give out forgiveness only up to 490 and after that we stop forgiving people? Of course not. What Jesus meant is that we always forgive others just as the Father has forgiven us over our past sin, present and future.

What is true forgiveness? If that servant after he threw his friend into the prison and get his 100 talents back and then he can say he forgive him? That is not forgiveness. That is collecting payment. That person has paid his due by being in prison and paid his money back. if someone hit you and you say you can only forgive him if he lets you hit him back; that does not count as forgiveness but it’s pay back.

True forgiveness is if we can let go of what the other person did. True forgiveness is not free. Someone has to pay for it which is the person who release forgiveness. It’s like the king in the parable, the servant of course is happy being forgiven but the king lost ten thousand dollars. If you forgive someone after being hit in the face and did not hit back; you were the one who suffer and pays for it. If your heart is broken but you are willing to forgive your spouse, it means you are willing to bear the hurt that the other person is inflicted upon you.

Jesus teaching seems hard to follow but He set the example first. It is not just empty word. Jesus died for us and took all of our sins so we could live. He forgives us and He was the One who suffer all of the consequences which is dead. We can’t say that we are believers and Christ followers if we don’t release forgiveness even though we suffer because of it; with this our Father will be glorified. Others will see how good Jesus truly is by us able to forgive.

If we truly want to forgive others who hurt us; just forgive them without asking them to pay anything back. that’s what Jesus did for us. God will give us strength to bear whatever others have done to us.

Daily prayer
Jesus, thank You for forgiving me and died for me. I will learn to forgive others with true forgiveness just as the Father has forgiven me. I believe that You will give me strength to do that and to bear the hurt that others have inflicted on me. I will find release in You and I believe that Your Name will be glorified when they see Your kindness and mercy that You have shown to us all. In the Name of Jesus I pray. Amen.